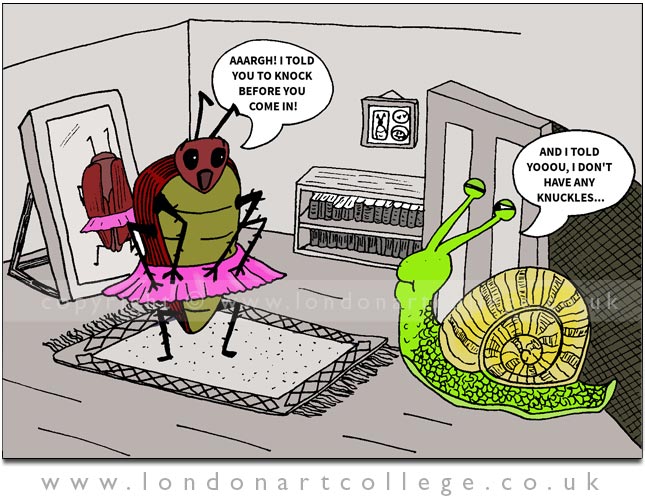 We have received some superb entries this year, (see below) there have been some excellent ideas and we enjoyed viewing all of the entries that have been sent in by our students.

John Byrne our cartooning tutor said ".... a few that certainly deserve a mention are Jimmy Gockel's Bob Dylan entry and Alice's giraffe entry which is an absolutely lovely drawing and such a sweet idea. Chris Trend's blade runner one is very clever..."

Spencer Hill our Illustration tutor said "....when you consider them as cartoons themed on the words knock knock there are some very clever and well drawn entries. Monique's is fabulous, and if I was commissioning one of them to draw me a cartoon I would have no hesitation in picking her."

We did though need to choose a winner and both John and Spencer discussed who completely fulfilled the brief of the competition and which one really made them laugh. The winner isSally Byerswith her Martian Cartoon Strip. Congratulations Sally! The winning entry can be seen on the right.

John and Spencer chose a very close runner up and we are happy to announce Lisa Laws cartoon came a close second. Well done Lisa! You can see Lisa Knock Knock entry below right.

Both John and Spencer have written about the competition, we hope you enjoy reading and viewing the winner and runner up entries.

I deliberately didn't look at any of the entries until I saw them all at once, and ...wow! what a high standard across the board-not least because the 'knock knock' joke itself is so old and so basic as a concept it takes some real 'outside the box' thinking to put a spin on them, and on that score each and every one of our students entries definitely delivered.

Just as impressive as the range of humour on display was the variety of styles and formats sent in , from single panel to strips, caricature to fantasy, and we really did have a job narrowing down a winner.


Sally's astronaut strip combined lovely artwork with an ending which not only raises a smile but also opens up so many possibilities for the reader to 'fill in' the rest of the story in their heads with brilliant reaction drawings adding to the comedy.

Well done to Sally and to everybody who entered-with talent like this it is no joke to say our students have left us 'over the moon'.

We had a really tough time picking a winner from all the entries to the cartoon competition this year.

Cartooning is a strange branch of the artistic world; you have to be an artist and a comedian at the same time. Art and comedy individually are two of the most subjective creative areas of all, so when you combine them into cartooning you are climbing a steep slope to Chucklesville.

The winner was chosen because she combined both of these and simultaneously made enough of the judges laugh to finish in first place. Well done everyone for taking part and putting themselves out there for judgement, and especially to Sally our worthy winner.